Susie Shepherd to be honored at Women Who Lead 2013!

We are thrilled to present Susie Shepherd with a Lifetime Achievement Award!

Please join us in honoring Susie Shepherd and Samantha Swaim at Women Who Lead 2013, Equity Foundation’s celebration of women work in service of equality. They lead our community forward through their work, volunteering, and spirit of giving. 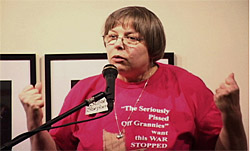 (The following was originally featured in PQ Monthly after Susie, along with other Portland Town Council Members, was awarded a Queer Heroes NW Award from the QCenter in June 2012)

Susie Shepherd was one of the first Oregon lesbians to fully embrace mainstream legislative politics as a means to achieve equality for the lesbian, gay, bisexual and transgender community. She has continued this work and expanded upon it throughout the years of her life. Susie’s dedication to the LGBT community earns her a heroes award from the Q Center.

In 1975 she joined the board of Portland Town Council (PTC) the first LGBT umbrella group in Oregon dedicated to civil rights for lesbins and gay men. Also in 1975-76 she spearheaded the writing of a PTC booklet entitled “A Legislative Guide to Gay Rights” which was aimed at educating policy makers on the gay issue. The booklet was 76 pages and won rave reviews in the national gay press. It was sold in LGBT bookstores across the US and from England to Australia.

By 1977 she was Oregon’s first paid female LGBT civil rights worker accepting the second position created at Portland Town Council. From this position Susie not only organized Oregonians for legislative hearings but also provided assistance to the No on 51 Campaign which was fighting a gay rights ballot measure in Eugene in 1978.

In addition to this position in 1978 Susie joined the board of the newly organized P.T.C. Political Action Committee. This was first LGBT political action committee in Oregon and only the second in the nation. Susie was also the first openly gay member of the board of the Oregon Council for Women’s Equality and the Oregon Women’s Political Caucus. As AIDS became an issue in Oregon Susie was there working with Cascade AIDS Project as a Personal Active Listener helping her gay brothers to cope with this new reality.

In 1989 Susie proved herself a leader again by winning the Portland Leatherwoman competition and later that year she won International Ms. Leather. Susie used these positions to fundraise both locally and nationally for gay causes. She raised over $60,000.

In 1993 the Bill and Ann Shepherd Legal Scholarship Fund of Equity Foundation was formed in honor of Susie’s parents. Susie has chaired that committee since 1997 organizing A Class Act, the group’s major fundraiser, every year since then. The group funds scholarships for third and fourth year law students dedicated to fighting bigotry and discrimination, particularly on the basis of sexual orientation and gender identity. The fund has provided over $100,000 in scholarships.

Samantha Swaim to be honored at Women Who Lead 2013!

Samantha Swaim to be honored at Women Who Lead 2013!