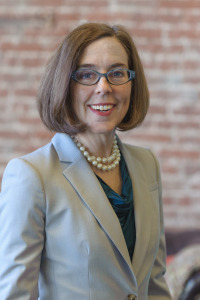 Equity Foundation is proud to honor Governor Kate Brown for her many contributions to our state and her advocacy for the LGBTQ community.

With more than 25 years of service to the people of Oregon, Kate Brown is well-prepared to serve as Oregon’s 38th Governor, making government more accountable and standing up for working families.

From 2008 to 2015, Brown served as Oregon’s Secretary of State, where she was a leader in increasing government transparency and accountability. In that office, Brown oversaw an Audits Division that identified millions in savings by increasing government efficiencies and rooting out waste. She streamlined business registration and licensing by implementing Business Xpress​, an online ‘one­‐stop shop’ that enables business owners and entrepreneurs to establish and run a business in Oregon without getting bumped around from state agency to state agency.

Brown successfully implemented an online voter registration system, which made it easier for Oregonians to register to vote and saved taxpayer dollars. Oregon received national recognition for Brown’s work utilizing technology to make it easier for active‐duty service members and people with disabilities to vote.

Prior to serving as Secretary of State, Brown served for 17 years in the state legislature: five years in the Oregon House of Representatives and 12 years in the Oregon State Senate. In 2004, Brown made history when she became the first woman in Oregon history to serve as Senate Majority Leader, after being elected by her colleagues.

During her time in the legislature, Kate Brown led efforts on government accountability and reform. In 2007, she successfully spearheaded legislation that The Oregonian called the “state’s most sweeping package of ethics reforms in 34 years.” And she led a bipartisan group of legislators to pass Oregon’s most significant campaign finance reform law in a generation, making campaign contributions more transparent than ever before by creating an online database for campaign finance reporting.

As a leader who has always been on the side of working Oregon families, Brown successfully helped pass Family and Medical Leave, making Oregon one of the first states in the nation to allow parents to stay home with their sick children without fear of losing their jobs. She also put Oregon on the map as the first state to require insurance companies to cover annual breast exams for women over 18 as part of preventive health care screenings.

Brown has also been a longtime leader in advancing civil rights and marriage equality. In 2007, she helped to pass the Oregon Equality Act, a civil rights law that prohibited discrimination in employment and housing on the basis of sexual orientation. And Brown was instrumental in passing Oregon’s Family Fairness Act, which legally recognizes committed same-­sex relationships as domestic partnerships.

Prior to running for public office, Brown practiced family and juvenile law. She taught at Portland State University, worked with the Juvenile Rights Project and co-­founded the Oregon Women’s Health and Wellness Alliance, which has been leading efforts to support women’s heath for more than 20 years.

Brown grew up in Minnesota and earned her undergraduate degree from the University of Colorado-­Boulder. Kate came to Oregon to attend Lewis and Clark’s Northwestern School of Law, where she received her law degree and Certificate in Environmental Law.

Brown lives in Portland with her husband Dan, and together, they raised Dan’s son and daughter who are now grown. When Brown is not busy at the Capitol in Salem, you’ll find her horseback riding or hiking. ​​